How Prophet Muhammad Connected with Children 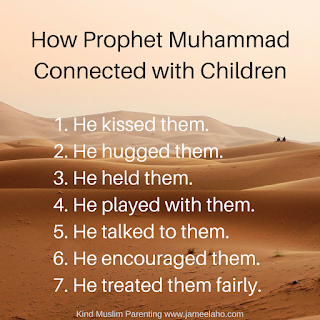 In the last post, you've read about why it's important to connect with your child. If you haven't read it then please do it. In this post, you'll see how Prophet Muhammad, peace be upon him, connected with all the children Companions.

Whenever I read a hadeeth about Prophet Muhammad, peace and blessings be upon him, that was narrated by a child Companion (or any Companion really) I could hear the love and feel the connection that they've had with him. They all loved and felt a deep connection with him. Which always made me asked the question, what did the Prophet, peace and blessings be upon him, do that endeared him to the children and forged this connection?

As usual, we turn to the ahadeeth.

1. He kissed them
Narrated Abu Hurairah (may Allah be pleased with him): Allah’s Messenger kissed Al-Hasan ibn `Ali while Al-Aqra` ibn Habis At-Tamimi was sitting with him . Al-Aqra` said, “I have ten children and have never kissed one of them.” The Prophet cast a look at him and said, “Whoever is not merciful to others will not be treated mercifully.” (Al-Bukhari)

2. He hugged them
Usamah ibn Zaid (may Allah be pleased with him) narrated that "Allah’s Messenger used to put me on (one of) his thighs and put Al-Hasan ibn `Ali on his other thigh, and then embrace us and say, “O Allah! Please be merciful to them, as I am merciful to them.” (Al-Bukhari)

3. He held them
Narrated Abu Qatadah: “The Messenger of Allah came towards us while carrying Umamah the daughter of Abi Al-`As (Prophet’s granddaughter) over his shoulder. He prayed, and when he wanted to bow, he put her down. When he stood up he lifted her up.” (Al-Bukhari)

4. He played with them
Ya’la Ibn Mura says: “I went out with the Prophet, peace of Allah be upon him, for a food invitation. Al-Hussain Ibn Ali was playing in the street, whereupon the Prophet hurried in front of the people towards him to catch him while Al-Hussain running right and left to escape. Moreover, he used to take Osama Ibn Zaid and Al-Hassan Ibn Ali and place them on his thighs then he would tightly hug them and say: “O Allah have mercy on the as I have mercy on them.” (Al-Bukhari)

5. He talked to them (about what's important to them)
Anas Ibn Malik (may Allah be pleased with him) says: “The Prophet, peace of Allah be upon him, was best of people in manners, and I had a brother called Abu ‘Umair and I think he was weaned, when he (Prophet) meets him he says to him: “What happened to Al-Nughair?” (his pet bird). (Agreed upon)

7. He treated them fairly
Sahl Ibn Sa’d says: “The Messenger of Allah -prayer and peace of Allah be upon him- had something to drink, so he drank and there was a boy on his right and elders on his left so he asks the Boy “Do you give me permission to give them?” the boy replies, “No, by Allah, I wouldn’t give my share from you to anyone”.” [Agreed upon]

These are easy things that you can do with your children. If you haven't done any of them then select one and do it regularly. Then when it's become second nature to you then pick another one and so on until, you're doing them all.


As usual, if you're a subscriber (or a member) then you'll be getting a checklist of this to help you to apply these actions. 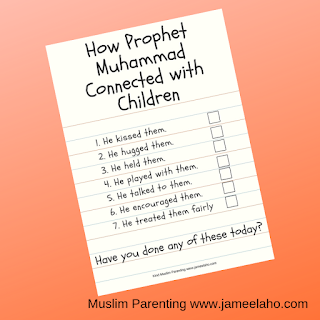 Email ThisBlogThis!Share to TwitterShare to FacebookShare to Pinterest
Labels: Connecting with Your Child, Parenting Tools