How to Give Advice to Your Child 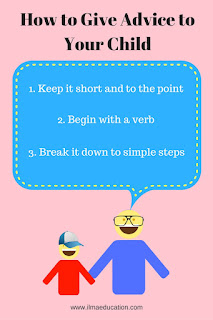 Parents are often ineffective in giving their child advice. If you listen carefully then you would hear berating, nagging and blaming included in their advice-giving.

On the authority of Sufyan bin Abdullah, may Allah be pleased with him, who said: "I said, 'O Messenger of Allah, tell me something about Islam which I can ask of no one but you.' He, peace be upon him, said, 'Say "I believe in Allah" — and then be steadfast.'" [Related by Muslim]

When we look at the Prophet’s advice, whether to children or adults alike, they were simple, straight to the point, gave instructions to do something (sometimes not to do something) and easy to understand.


1. Keep it short and to the point

Like the first hadeeth, this advice was simple: “Do not get angry”. The first was “Say I believe in Allah and then be steadfast”. They were both clear. They were simple. They were straight to the point. There was no ambiguity or room for confusion.

The Prophet, peace be upon him, did not embellish his advice with negative communication. There were no criticisms, put-downs, threats, sarcasm or lecturing. How often do we give advice by saying, “If you know what’s good for you then you must do this or else you will get nowhere in life.”? This is a threat. Or have you heard yourself or others saying to children, “You can’t do anything right. That’s not how to do it. This is how you should do it.” This is a criticism and put down. You get the idea so there’s no need to go into sarcasm and lecturing. We hear them often enough in our own or other parent’s speech.

What do you notice from the above hadeeth and the two previous ones? The advice comes in the form of instructions. “Do this…” or “Don’t do this…” Instructions usually start with verbs such as say, be, ask and seek.

A variation of simple saying “Do this” is adding the benefit: “Do this…then you will get this…(benefit)..” or the reverse: “If you want/need this...(benefit)…then do this..” You can see the example from the above hadeeth but here are some more: “Share your toys then you will have friends” or “If you want to be liked then be trustworthy.”


3. Break it down to simple steps

Omar Ibn Aby Salamah narrated, “I was a little boy sitting on the Prophet’s lap and my hand is all over the plate, then the Messenger of Allah said to me: “O boy, say ‘Bismillah’ (In the name of Allah), eat with your right hand and eat from what’s in front of you.” [Related by Tirmidhi, Agreed upon]

When the Prophet, peace be upon him, saw someone doing something wrong then he gave instructions on how to do it right. He broke it down to simple steps and used the instruction formula which is to start with a verb and say: “Do this…

This point relates to both point number one and two, that is, the Prophet, peace be upon him, made the instructions short and simple and started them with verbs (say and eat). Again, there was no need for embellishments.

If you want to put this advice-giving into practice according to how the Prophet, peace be upon him, did it then join me in the 5 Qualities of a Muslim Parent where we practice this in Lessons 11 and 12. We go into this in more details.
Posted by Jameela at 02:43