5 Ways to Teach Kids to Care for Others 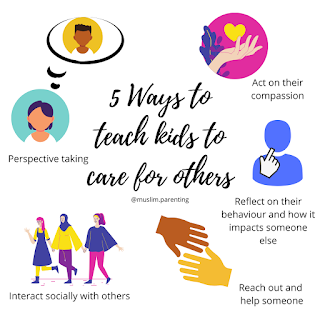 Islam does not condone racism. This is something that Prophet Muhammad (s) spoke against in his last sermon.

To ensure that our children don’t grow to be racists but to care for all people no matter what they look like or where they’re from, here are 5 ways.

Taking the perspective of others is the first step towards empathy. To help develop this, have regular discussions with your children on how others are thinking and feeling. When you notice someone sad or undergoing some sort of emotion, you could ask your children, "What do you think he's feeling? How can you tell?" or "Why do you think she might feel that way?"

2. Act on Their Compassion

Encourage your children to act on their compassion and not just to feel it. It's all well and good to feel compassion for others but it's much better to do something about it and make it easier for that person.

3. Reflect on Their Actions

When your children has just acted in a way that was either helpful or not helpful you could ask, "Was that action helpful to others?" and "How can you tell?" If it was helpful, you could say, "MashaAllah, you're such a helpful person!" If it was not helpful then you could comment, "How can you fix it to make it helpful?" or "What can you do next time to help others?"

4. Reach Out and Help Someone

Teach your children to help others and to not stand around and wait for others to help. This is called the Bystander Effect and it happens because when there are other people around, everyone expects the others to help. If someone dropped their things all over the floor, help to pick them up. If someone is carrying something heavy then help to open the shop door. If someone slipped then pull them up. You want your children to have the instinct to help.

Care needs to be taken here of course, about stranger danger. Teach your children that as long as they're in the open with lots of people around then it's pretty safe to help. Just don't go into alleyways or follow someone into their homes or cars. Remember, open areas and not confined spaces.

O you mankind, surely We created you of a male and a female, and We have made you races and tribes that you may get mutually acquainted. Surely the most honorable among you in the Providence of Allah are the most pious; surely Allah is Ever-Knowing, Ever-Cognizant. (Quran, Hujarat 49:13)

These are just some ways to raise kids who are kind to everyone. Can you think of some more ways?
Posted by Jameela at 18:18