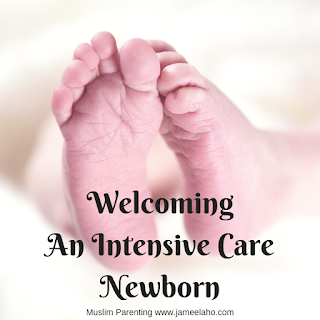 Last week, by the Will of Allah, we had the first of the next generation added to our extended family. My niece had a baby so he's my great nephew (that makes me sound so old!). Praise be to Allah.

When we visited the baby, we found him in the intensive care nursery, apparently he had trouble breathing on his own. It turned out that he had an under-developed larynx that we were assured should sort itself out with time. However, they wanted to do a brain scan to make sure that everything is alright. For this to happen, my nephew has been transferred to another hospital and has been in that hospital for about a week now waiting to have his scan. They wanted him to settled first before they do it.

Oh my poor little nephew! A week in hospital without his mother. Of course she visits him but it's not the same to have a newly born with you constantly. He needs his mother!

This brought back memories of my second child. He was premature and was 2.3 kg. Yes, he too was transported to another hospital and they'd kept him there for about 2 weeks until he reached 3 kg. My poor little baby! He needed me and I wasn't there. To this day, I still feel the guilt.

I know the hospital staff try their best but whenever I visited my baby, I would always hear the other premature babies crying and never picked up. I know some people believe that babies should self-sooth but I'm not of that opinion. If my baby cried I picked him up and comforted him. The agony of knowing that when I wasn't there and my baby was crying with no one to comfort him but just to occasionally feed him or change him.

I've tried to overcompensate for those first 2 weeks by holding him as often as I could and talking to him constantly. I have to admit that this was what I did with my first child as well. This is my parenting style which I later learnt is called attachment parenting.

Back to my niece and the advise that I gave to her is:

1. The newborn needs the human touch
Constantly touch him, hold him, gently stroke his back, head, hands and feet. Place him on your chest while you're lying down and let him feel your heartbeat and breathing. If you're braver then try giving baby very light massages (caresses) with coconut oil.

In a very old research in an orphanage, what they've found was that babies who were held more (because they were cuter or easy) survived more than those that weren't held as much or at all. These babies failed to thrived and eventually died.

2. Your newborn needs your voice
Constantly talk to your baby. Your baby recognises your voice from when he was in your uterus so it'll be a comfort to him to hear it again and again. To comfort him more, you can recite Quran to him. This will teach him to seek comfort in the Words of Allah. Of course, if you've recited Quran during your pregnancy with him then he would have recognised it already.

Email ThisBlogThis!Share to TwitterShare to FacebookShare to Pinterest
Labels: Babies, Child Development, Connecting with Your Child