Teach Your Child to Be Truthful 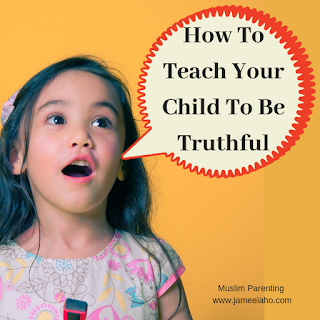 As Muslims, we know that honesty is very important since telling the truth is a quality that Allah loves and encourages us to do. Allah says in the Quran:

There are many Quran verses relating to truthfulness as well as many ahadeeth. The following is one:

Abdullah bin Mas`ud said that the Messenger of Allah said, "Hold on to truth, for being truthful leads to righteousness, and righteousness leads to Paradise. Verily, a man will keep saying the truth and striving for truth, until he is written before Allah as very truthful (Siddiq). Beware of lying, for lying leads to sin, and sin leads to the Fire. Verily, the man will keep lying and striving for falsehood until he is written before Allah as a great liar." (Al Bukhari and Muslim)

The question that many parents have is how do we teach our children to be truthful? Before we look at the ways parents can their child to be truthful, we'll look at why children lie.

Most children don't tell the truth because they're bad. They lie because they're afraid of the consequences of their behaviour. They know what they did was wrong but they try to cover it so they won't be punished or earn their parent's displeasure.

Now that you understand why children lie. how can you promote honesty in your child? According to research:

As usual, start with yourself first. You are your child's model. Your child learns everything by watching you.

2. Don't punish your child when you discover that they have lied

When you realise that the number one reason why children lie is because they're afraid of your displeasure or punishment then to encourage them to tell the truth, you wouldn't want to scold them or punish them when they do tell you the truth about what they did wrong.

3. Ask your child to promise to not lie to you

It can be as simple as asking your child to promise to not lie to you. Sit your child down and tell them how the truth is important to you and to Allah then have them promise to tell you the truth no matter what.

4. Tell stories about the good consequences of truthfulness.

Research has found that honesty stories like The Boy Who Cried Wolf or Pinocchio don't result in children telling the truth. Instead, it's stories like the fabled George Washington and the Cherry Tree that had a better effect on getting children to tell the truth. 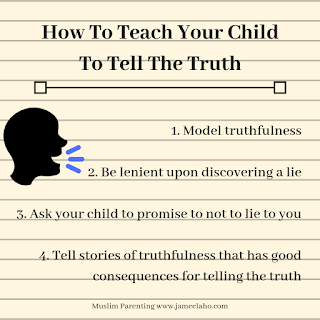 The Three Who Stayed Behind


This is the story of Ka`b bin Malik, `Murarah bin Ar-Rabi` Al-`Amiri and Hilal bin Umayyah Al-Waqifi who told the truth about why they didn't follow the Prophet, peace be upon him, to war - that they had no excuse. They could have lied and got away with it like the others but they couldn't lie and decided to tell the truth. With that truthfulness and repentance, Allah forgave them.

"And [He also forgave] the three who were left behind [and regretted their error] to the point that the earth closed in on them in spite of its vastness and their souls confined them and they were certain that there is no refuge from Allah except in Him. Then He turned to them so they could repent. Indeed, Allah is the Accepting of repentance, the Merciful." (Quran 9:118)

Ka'b bin Malik narrated the story and concluded with, "We, the three persons, differed altogether from those whose excuses Allah's Messenger accepted when they swore to him. He took their pledge and asked Allah to forgive them, but Allah's Messenger left our case pending until Allah gave us His judgement about it. (Al-Bukhari and Muslim)

The Boy Who Told the Truth to the Robbers


This is the story of the scholar Abdul Qadir Jilani when he was young and travelling with a caravan to Baghdad to learn. On the journey they were robbed by a group of bandits. When asked if he had any valuables, the young Abdul Qadir told the truth that he had gold coins hidden. The robber was shocked to hear him tell the truth when he could have easily lied. Abdul Qadir Jilani told the robber that his mother told him never to lie. The robber was so impressed with his truthfulness that it made him repent to Allah for all the robberies that he did and so he returned all the things that the group stolen. (Read details here.)

These are just two true stories to inspire your children to truthfulness. Tell it to your child often so that they can remember it and with Allah's Will, act on it.