Ways to Treat Your Daughters Well 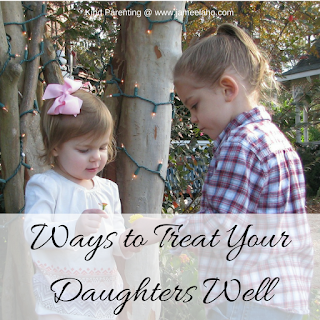 I've always loved children and I'm not kidding when I say I was always seen with a child on my hip even at a young age. I have cousins who are ten years younger than me so at 12 years of age I was always playing with them. What I love most was dressing up the girls' hairs - plaiting them and putting ribbons and pretty clips on. No, I didn't want to be a hairdresser when I grew up.

When I learnt to sew I started making pretty little dresses for friends's children as well as dressed their hair. Soon I had many nieces that I would make pretty clothes for and do their hair. No, I didn't want to be a clothes designer when I grew up.

What I wanted when I grew up and got married were girls. I dreamed of the pretty clothes I'd sew and the hours of fun doing their hair. Alhamdulillah I've got boys instead. If I could, I would have kept trying until I had at least two girls. We have plans but Allah has better plans for us.

The reason I write this is because you don't know how lucky you are if you have girls. Daughters are more caring. OK boys are caring too but in a different way. Your daughters are more likely than anyone in your family who will take care of you in your old age. They will sacrifice their time for you but your sons will be too busy with their jobs.

Besides, your daughters will be a protection for you from the hellfire and a way to paradise.

Jabir ibn Abdullah reported that The Messenger of Allah, peace and blessings be upon him, said, “Whoever has three daughters and he cares for them, he is merciful to them, and he clothes them, then Paradise is certainly required for him.” It was said, “O Messenger of Allah, what if he has only two?” The Prophet said, “Even two.” Some people thought that if they had said to him one, the Prophet would have said even one. (Ahmad)

Treating your daughters well is the same as treating any of your children well, be they girl or boy. The main concern specifically for daughters, though,  are that you:

Among themselves, don't choose favourites. Treat all your daughters fairly. Children, be they boys or girls, always know when their parents prefer one over the other.

When my children were young they'd make something and asked me "Which one do you like better?" I would answer "I like them both". After a while, they knew I'd say the same thing so they persisted and asked "We know that but which one is better?" I kept my neutrality and said "Each one is good in it's own way" and pointed out the good qualities of each. I could see that one was better, only because one child was three years older and has more dexterity so they can't be judged with each other. After a while my children stopped asking me to judge between them.

Treating your daughters fairly also means that if you have boys as well then don't prefer the boys over the girls or vice versa. It's common for parents to treat their sons differently to their daughters. OK boys and girls are different but if one set of rules apply to your daughters then they should also apply to your sons.

2. Don't force daughters to marry someone whom they don't want to marry

Why is it that most sons are not forced into marriages but most daughters are? Most parents are like: You marry your cousin from back in the old country or You marry this boy from this well connected family or you will be disowned. That is not good treatment.

In Islam a forced marriage is an invalid marriage as this hadeeth illustrates: Khansa Bint Khidam said “My father married me to his nephew, and I did not like this match, so I complained to the Messenger of Allah, may Allah bless him and grant him peace. He said to me “accept what your father has arranged.” I said “I do not wish to accept what my father has arranged.”

He said “then this marriage is invalid, go and marry whomever you wish.” I said “I have accepted what my father has arranged, but I wanted women to know that fathers have no right in their daughter’s matters (i.e. they have no right to force a marriage on them). (Al Bukhari and Ibn Majah)


3. Seek a good husband for your daughters

Having said the above, it is the parents' duty to find a good husband for their daughters. In a similar hadeeth to the one above, narrated by Abu Sa'id al-Khudrithe that the Prophet, peace and blessings be upon him, said: "If anyone cares for three daughters, disciplines them, marries them, and does good to them, he will go to Paradise." (Abu-Dawood)

The key is to find not to force. You find a good boy and you present him to your daughter. After that she makes the decision to marry him or not. If not then you go out of your way to find her another one and so on until she's agreeable.

Too often, parents give up on looking for a husband for their daughters and the daughters are left unmarried. This is a growing trend. Of course, there are other factors contributing to this but this is one of them so as parents you must try your best and then leave the rest up to Allah and your daughter's destiny.
Posted by Jameela at 16:17

Email ThisBlogThis!Share to TwitterShare to FacebookShare to Pinterest
Labels: Relationships